Immigration, the Safety Net, and Public Charge – Q&A with NILC

The public charge analysis generally looks at all the facts and circumstances relevant to the applicants’ ability to support themselves and any dependents. However, under guidance in effect since the 1990s, only two benefits can be considered in the public charge assessment: cash assistance for income maintenance and institutionalization for long-term care at the government’s expense. Under the guidance, primary dependence on either of the two benefits is synonymous with the definition of public charge.

There is no statutory definition of public charge, and proposed regulations that accompanied the guidance mentioned above were never finalized. The Department of Homeland Security (DHS) is now preparing to publish proposed public charge regulations.

Based on drafts published in the press, the proposal would broadly expand the benefits to be considered under the public charge determination, defining public benefit as any government assistance that is means-tested or intended to help the recipient meet basic living requirements. This definition explicitly includes Medicaid, CHIP, ACA subsidies, SNAP, WIC, housing assistance, refundable tax credits, and many other programs. The leaked rule also indicates the Administration’s intent to consider the use of public benefits by the applicant’s family, explicitly including U.S. citizen children.

The draft we have seen imposes a number of new barriers that include treating limited English proficiency, an income below 250% of the federal poverty line, and having a health condition without unsubsidized insurance as negative factors.

A draft executive order leaked in January 2017 was the first signal of this threat, followed by revisions to the State Department’s instructions to consular officials in January 2018. The State Department’s revised instructions added to the public charge consideration the use of any public benefit by applicants for admission, their family members, or their sponsors. In February 2018, media outlets published a leaked draft Notice of Proposed Rulemaking (NPRM), and we verified that DHS had placed the development of new Public Charge rules in the Unified Federal Regulatory Agenda.

The proposed expansion of the public charge rules will likely cause immigrants to avoid receiving benefits, including essential health and nutrition benefits, for which they are eligible. We have already begun to hear about people asking to withdraw from Medicaid, WIC, and SNAP. The 1990s guidance was adopted in response to concerns about negative public health effects caused by immigrants avoiding essential health and nutrition programs. The proposed regulations would recreate a situation in which lawfully present immigrants eligible for public programs intentionally choose to go without needed services because of fears related to their immigration status.

The proposed regulations would make it more difficult for people with fewer means to unite their families and to become citizens and voters. If finalized, this proposal would force immigrants to make impossible choices between obtaining the health care, food, and educational assistance they and their families need to thrive and gaining the security of permanent legal status.

What does the latest research tell us about immigrant families’ access and use of safety net programs, including TANF, Medicaid, CHIP, SNAP, and tax credits such as the EITC?

Despite claims that immigrants use public benefits widely, a 2013 Cato Institute study found that low-income non-citizens receive Medicaid, SNAP, cash assistance, and SSI at lower rates than comparable low-income native-born children and adults. This finding is not surprising because restrictive eligibility rules and other barriers, such as concerns about confidentiality, prevent many immigrants from accessing benefits. One of the authors of the Cato Institute study prepared this updated analysis of health program use: 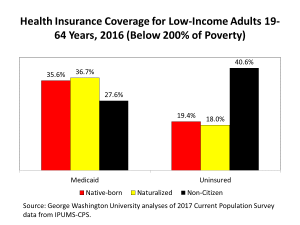 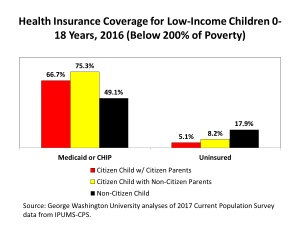 Regarding the EITC, the most authoritative resource on immigrants’ use of the EITC is a 2005 study from Brookings. The study found that immigrants who lived in areas with high concentrations of immigrants were more likely to receive the EITC than those who lived in areas that were less immigrant-rich. The author attributed the difference to the likelihood of less targeted outreach and thinner immigrant social networks.

What policies and regulation changes should immigration and economic security funders be aware of?

Since its earliest days, the Trump Administration has adopted a series of policies that adversely impact immigrants and low-income communities. Less than a week after inauguration, the President signed a series of Executive Orders that banned immigrants from a list of majority Muslim countries, called for the construction of a wall on the U.S.-Mexico border, and made every immigrant living in the U.S. without authorization a potential target for deportation.

DACA provides two-year grants of work authorization and protection from deportation to over 800,000 people above the age of 15, who were under age 31 in 2012, under age 16 when they came to the US, have resided in the country since 2007, passed a background check, and meet educational or military service requirements. In the negotiations with Congress that followed the termination of DACA, the Administration presented a plan that would limit family-based immigration, end the Diversity Immigrant Visa Program (‘Green Card Lottery’), and fund the construction of the border wall. Attempts to end DACA have been enjoined by the courts, but as of the date of publication, no new applications for DACA were being accepted, only renewals of prior grants of DACA..

In September 2017, the same month the termination of DACA was announced, the President announced an unprecedented reduction in the number of refugees to be admitted to the U.S. – from 110,000 under the prior administration to just 45,000 in FY2018. However, based on current trends that include a slowdown in refugee processing, the International Refugee Committee (IRC) projects that only 21,292 refugees will ultimately be resettled in FY2018. Processing of other immigration applications, including for asylum, have also slowed, contributing to a significant backlog.

The Administration declined to renew Temporary Protected Status (TPS) for nationals of multiple countries living in the United States, including persons who have lived in the United States for decades, many of whom have homes, businesses, and U.S. citizen children. TPS is a form of humanitarian protection granted to persons who are present in the United States when an event such as conflict or natural disaster occurs in their home country and makes it unsafe to return. It is granted for a fixed time period and historically renewed until home country conditions improve. It was recently revealed that DHS was aware that conditions in Haiti remained unstable when it decided to end TPS for nationals of that country.

The Administration supported the 2017 tax law, which is expected to cost $1.5 trillion  over the next decade, creating pressure to cut public programs to reduce the deficit. It also supported unsuccessful efforts to repeal the Affordable Care Act (ACA) and has undermined the stability of the law and the insurance exchanges through a series of policy decisions and proposals. These include ending federal reimbursement of insurers for mandated Cost Sharing Reduction payments that help low-income consumers afford out-of-pocket costs like deductibles.

This month, President Trump released a memo that instructs DHS and other federal agencies to report on their progress in ending the practice of releasing low-risk immigrant detainees pending their hearings, sometimes called ‘catch and release.’ The memo also instructs the agencies to detail the steps they are taking to allocate money to build detention facilities near the borders.

President Trump also issued an Executive Order requiring federal agencies that grant public benefits to conduct internal reviews and report back regarding the implementation of work requirements in their programs. The Department of Health and Human Services has already encouraged state Medicaid agencies to implement work requirements in their Medicaid programs and has approved waiver requests to implement such requirements. The Executive Order also instructed the agencies to review and report on the use of benefits by ineligible immigrants, ignoring the verification of immigration status that occurs in the benefits application process and fueling a narrative that claims unauthorized immigrants are taking advantage of the country.

Are there states that have policies more supportive of immigrant families? Tell us more about state to state policy differences.

State policies related to immigrants and immigration must be consistent with the framework established by federal law, but within that framework there is wide variation in states’ support for their immigrant residents. Policies that frequently differ across states include eligibility for health and public benefit programs, access to drivers’ licenses and other forms of identification, eligibility for in-state tuition and financial aid for higher education, protection of workers’ rights, and trust-building by limiting law enforcement entanglement with federal immigration enforcement. See: Inclusive Policies Advance in States.

Within health and public benefit programs, federal law generally restricts eligibility to a subset of lawfully-present immigrants called Qualified Immigrants and makes many Qualified Immigrants ineligible for federal and federally-matched benefits (except for Emergency Medicaid and SNAP for children) during their first five years in a Qualified status. However, within CHIP, states can opt into covering all Lawfully Residing children and pregnant women, without the five year bar to eligibility, and to provide pregnancy-related services to women regardless of their immigration status. States receive federal matching funds for these services. 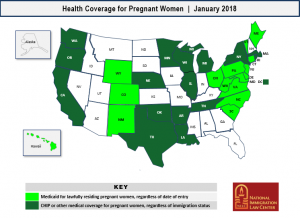 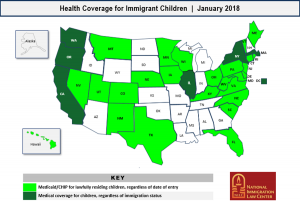 About half of the states provide state-funded cash assistance programs for immigrant residents who are ineligible for TANF. These programs often provide fewer benefits and have more restrictions than TANF. See: State-funded TANF Replacement Programs. Only a handful of states provide nutrition assistance to immigrant residents who are ineligible for SNAP. See: State-Funded Food Assistance Programs.

Eligibility for state-funded benefit programs is often limited by “deeming,” which affects immigrants who have a sponsor. Family-based and some employment-based immigrants are required to have one or more sponsors who can demonstrate their ability to support the immigrant at 125% of the Federal Poverty Level and who sign an Affidavit of Support on their behalf. Benefits agencies can deem a sponsor’s income as being available to a sponsored immigrant in determining the immigrant’s eligibility for benefit programs.

What can funders do? How can they stay connected to the issue?

The Protecting Immigrant Families Campaign was created to defend against Administration policies that threaten the well-being of immigrant families and to advance long-term cultural and policy changes that ensure everyone, regardless of where they were born, has access to the resources and opportunities they need to thrive.

Joining the Protecting Immigrant Families Campaign, co-chaired by NILC and the Center for Law and Social Policy (CLASP), is an important way that funders can stay connected to the issues: listserv sign up link.

The Campaign’s goal is to defend and advance low-income immigrant families’ access to vital public services like health care and nutrition programs. This project has enormous importance because of the urgency of the threats and the incredible demand for immediate information and effective responses from families, service providers, community leaders, and policy-makers. The vision and purpose of the Campaign are:

To help protect immigrant families, funders could work with the Campaign to: